The Switch has had a slow start to 2019 after a titanically successful 2018. But one place that is always alive and kicking is the Nintendo e-Shop. In the endless tirade that is the stream of games that flood the service, there is one game you absolutely should not miss – Downwell – quite possibly the best value game of 2019.

Picture this – You are a boy who discovers a pair of boots. Not very interesting so far I know, but stay with me here. Now imagine those boots have guns attached to them. What would you do in this situation? Obviously you would jump down the local Well and bring gunpowder-justice to the demons that lurk within. I mean really, is there any other use for Gunboots?

Well this might surprise you, but yes. If my ramblings have given you any insight thus far, I’d imagine you’ve come to the conclusion that in Downwell, you go down the Well. And you’d be right. The basic gameplay loop is that you take your handy-dandy boots and let gravity do its thing. On your way down you need to combat various monsters, demons and ethereal horrors all whilst picking up gems, upgrades and doing some light shopping. Once you inevitably die, your ‘run’ is over, and you lose all your upgrades and start again. That’s right, this is a Rogue-Lite. 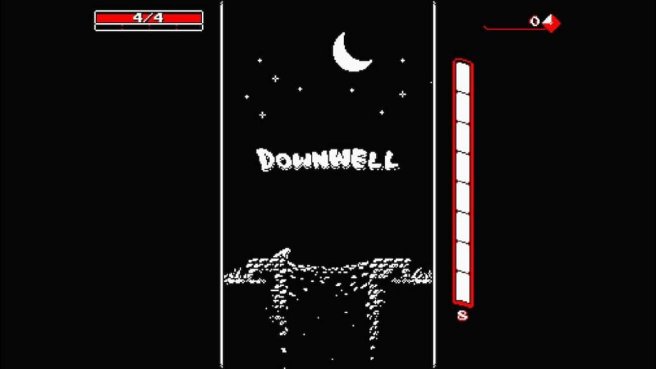 Your goal is to reach the bottom of the Well, kill the boss and nab whatever loot you find along the way. You have two methods of attack in Downwell – shooting and gravity. As you are falling, you can fire your Gunboots. This damages enemies below you whilst also massively slowing your descent with physics defying recoil, giving you more time to manoeuvre. Your boots come with one major flaw however – they have limited ammunition. After 5 or 6 shots you are completely spent. The only way to reload is to land on a platform, or land on an enemy – bringing the power of Sir Isaac Newton to bare.

Bopping enemies on the noggin with either bullet or boot rewards you with a nifty combo. The higher your combo, the higher the reward. Your reward mostly comes in the form of Gems – the in-game currency. Boom, bang, splat – then take your hard earned scratch to one of the many stores scattered throughout the Well and pick up some nifty consumables to keep you falling further.

You will also come across a bevy of powerful weapons along your journey. Each one has unique properties that alter rate of fire, power and recoil. Adding an extra layer of depth to the whole weapon system, Downwell rewards you with healing or bonus ammo whenever you pick up a new weapon (therefore discarding your previous weapon). This forces you to choose between a gun you currently like and a gun that you dislike. The former being more effective at killing, but the latter healing you enough to keep you alive until the end of the stage. 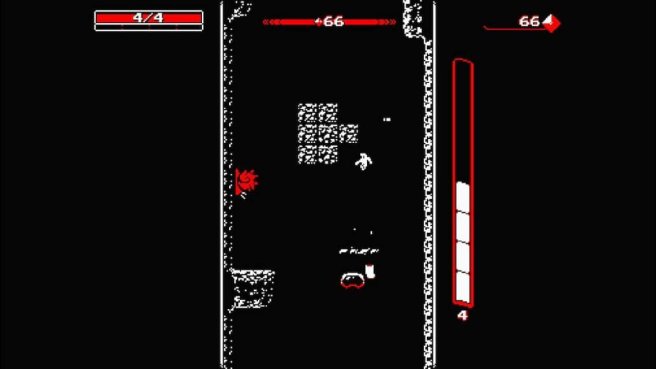 Speaking of wells and depth, once you make your way to the end of a stage you get to pick from a selection of powerful upgrades. These range from simple healing to full on explosions when you land on an enemy. Heck you could even pick up some cutlery – giving you the disturbing ability to devour your defeated enemies. Utilising these upgrades, weapons and shops is key to your continued success.

To survive you are going to need to recognise potential threats quickly, and adapt with split second reflexes. Luckily, Downwell has you covered with its very minimalistic pixel art style. With only 3 colours on display at any one time, you can instantly recognise which enemies can be stomped, and which ones need to be blasted or avoided. Heck, Downwell helps you out even further by giving you ultra-tight controls and only 3 buttons. As challenging as Downwell is, it very rarely feels unfair.

As you are plummeting into the abyss, the games stellar soundtrack keeps your heart pumping in a rhythm that almost resembles human. The music is absolutely rock solid. Whilst not massively memorable, when it plays you can’t help but bop along and get into the flow. Don’t even get me started on the sound effects. For a game that looks as retro as Downwell, there are few games that provide as much satisfaction as colliding with the skulls of your enemies. The satisfying crunch, the impactful gun shots – it’s all top notch. 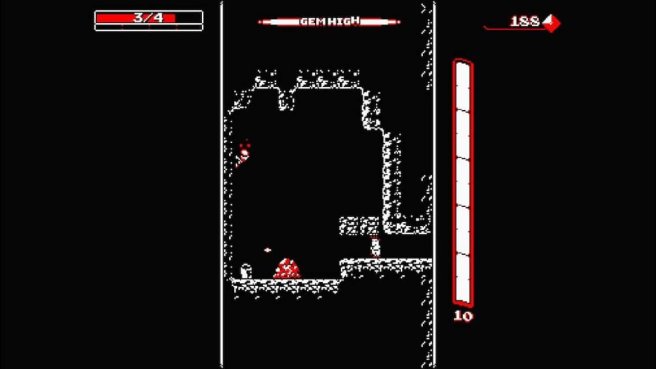 Downwell can theoretically be completed in as little as 20 minutes. The game is split into 12 or so levels, with each level taking 1-2 minutes to complete. But let me be straight with you – I am 10 hours in and I have not even seen the last boss. Amazingly, those 10 hours of failure have been some of the most addictive gaming I have ever experienced. This is exacerbated by the constant rewards the game throws at you. Every few runs will reward you with cosmetics and even new characters to take down the Well. So yeah, 20 minutes might not be achievable until you’ve sunk a boatload of hours into it.

This may come as a shocker, but I absolutely love Downwell. It effortlessly combines style, quick gameplay sessions and a heroin-esque addictiveness that I simply cannot get enough of. Whether I have 5 minutes or 2 hours spare, Downwell is on my list of games I want to play – it is just that good. Whilst I do not like to factor in a games cost, Downwell is one of the only exceptions. For a couple quid, you are getting tens of hours of heart thumping awesomeness. I cannot recommend this title enough.

Overall I give Downwell a 0 on the Toaster Scale. Your slab of sourdough totally broke your toaster. So you decided to slap some oil in a pan, deep-fry your bread, and make a heart-stopping slice of gluttonous deliciousness.

Follow me on Twitter @gameswithtoasty, or join the Games With Toasty Facebook page here for exclusive updates on the future of the blog, as well as notifications for when the latest articles drop. Happy gaming.

Forged in the North of England, Toasty set out on a divine pilgrimage to spread his mediocre gaming opinions to the masses. He has an unnatural fondness for bagels. View all posts by Toasty