March is almost upon us, and that means the first wave of Nintendo’s 2019 releases is on its way. To help build hype for Yoshi’s latest foray into 2D platforming, the ‘Big N’ gave us a little taste by dropping a demo. Based on this snippet of gameplay, is Yoshi’s Crafted World looking to be a crisp fold, or a wet tissue?

Straight out the gate you will immediatly notice the beautiful visuals. Let me settle with you guys, I play ASCII games, so graphics are not really important to me. But butter my crumpets, is this a treat for the eyes. The world is made up of selotaped pieces of paper, cardboard and felt. It’s like looking at a 7 year olds art project – and it’s as glorious as it is adorable. Enemies are cute enough to squeeze and I think most people would want a Poochie in their lives if they had the chance. Even by Nintendo’s colourful standards, Yoshi towers above its contemporaries.

Backing the beautiful world is quite possibly one of the most relaxing, and charming musical scores in recent memory. You could overlay the music over Resident Evil and let me tell you – you’d be bopping along, filled with boundless jubilation. Heck, even the sound effects sound great. From Yoshi’s fluttering jump, or his eggs concussing a shy guy – it all just fits. 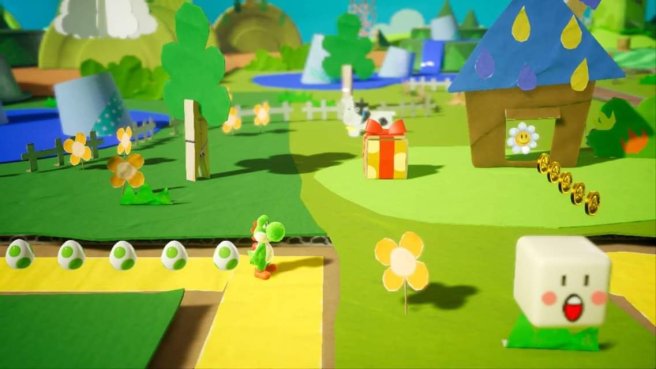 But all of this would be moot if the gameplay was naff. Luckily for us Switch owners, it is far from being naff. Yoshi’s Crafted World is 2D platformer where you guide your adorable green dinosaur from point A to point B picking up collectibles, finding secrets, solving puzzles and bringing untold destruction upon your foes.

Platforming in the demo is a very simple affair. Yoshi has a very forgiving double jump that allows you to leap around platforms with ease. There are no instant death pits, no blind leaps and honestly – no stress. From the trailers it is clear that things do ramp up, but I don’t expect things to necessarily get difficult.

The same goes for combat. Enemies are either devoured and instantly digested and turned into eggs, or those eggs are used to kill enemies too large for consumption. Yoshi feels almost unstoppable, in a carefree sort of way. The combat looks to ramp up with the inclusion of bosses and different enemies, but I think its safe to say combat will remain fairly simple.

Finally the exploration and puzzles. Again, these are fairly simple. You move through the levels, interact with the background and foreground to uncover collectibles. It took around 3 tries to 100% the 2 levels on offer. For completionists, this is where the challenge will likely emanate from.

Carefree, stressfree and fun. These are 3 words that encapsulate Yoshi’s Crafted World in its entirity. For beginners to the genre – they will be able to play the demo (and im confident they could play the full game) and just have fun. As a grizzled veteran I found the slow pace and the charming atmosphere refreshing and I definitely want to see more of what the game has to offer.

Overall, I feel like Yoshi’s Crafted World is shaping up to be a fantastic title. Whilst it is undeniably simple and is unlikely to get Super Meat Boy levels of difficult, this is a game that captivated me from the get go. To my great surprise, this has become one of my most anticipated games of the year. Definitely keep an eye on this one.

Legends fortold in the scrolls tell of a man. A man destined to wow the masses with his wit, charm and eye-melting good looks. Ladies and gentlemen, I am not that man. If I was to describe myself, I would use the phrase - 'Optimistically awful'. View all posts by Toasty