The Battle Royale genre has truly taken the world by storm. With titans like Fortnite, PUBG and Apex Legends dominating the scene, Nintendo had a monumentus task breaking in. So Nintendo, in typical Nintendo fashion, made the game nobody knew they wanted – Tetris 99.

Tetris 99 is a very literal title. You play Tetris with 99 other players, with the last man standing being crowned the victor. Now I am sure most people have played, or know of Tetris – it is one of the most popular games of all time after all. But for those of you who have lived under a rock for the last 20 years, I am happy to give you the rundown.

You slap a couple weird shaped blocks to the bottom of your screen and make lines. When your line is completed, it vanishes. If your tower of blocks reach the top of the screen, you lose. Easy-peasy.

Tetris 99 throws a few spanners into the works that makes it a teensy bit more complex than your typical block-dropper. Enemies will be trying to murder you left, right and centre. Lines they clear go to you, filling your screen with junk. When multiple enemies attack you’re gonna have a bad day.

Of course, you are not defenseless. Every line you clear goes to your enemies, and has the added benefit of stopping incoming attacks. If you manage to ‘kill’ an enemy you get a badge. Badges make your attacks more damaging, and your defense more formidable. Awesome right?

Not quite. badges are not always a good thing. This is because of the auto targeting system. Players can select between random players, players who are about to die, players who are attacking them and players with the most badges. Draw too much attention and you’ll quickly draw the ire of your competition. 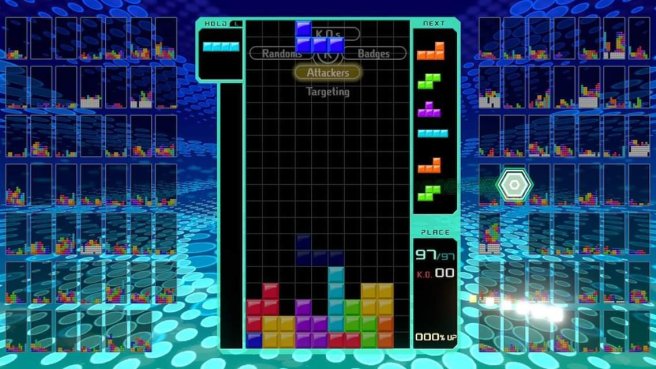 So now you know the ins and outs of Tetris 99, is it any good? Well if the title of this article is anything to go by, then yes. Its bloody fantastic! Games start in a matter of seconds and end within a few minutes. Your heart thumping as you deftly manouvre your tetriminos into the best postion to secure a sick combo. It is an adrenaline fueled slice of puzzle heaven.

Backing the myocardial infarction inducing gamplay is an amazing sound track. The classic Tetris theme has been remixed, and it is glorious. As the game progresses, the music speeds up adding more fuel to the fire. For a tune that is over 20 years old, it still packs one hell of punch.

Unfortunately the same can’t be said about the presentation. Don’t get me wrong, the game looks pretty sharp graphically. The issue is with 99 games of Tetris on screen, attack lines zipping all over the place and explosions of colour errupting everywhere – it just looks busy. So busy that it is actually distracting. 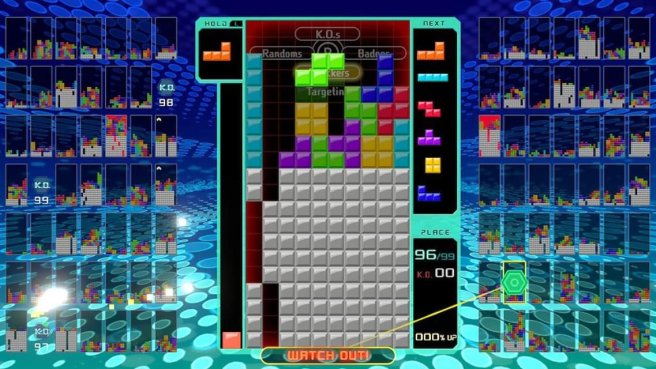 Adding bit more salt to the wound is the lack of variety. Tetris 99 has 1 game mode and that is it. It also has no tutorial to explain its unique mechanics, and from what I can tell, the match making is completely random. Now it is a free game, so what you do get is obviously good value. Just dont expect anything extra to spice things up.

Overall Tetris 99 is the most surprising game I have played this year. Whilst it has its flaws, it is easily one of my most played games due to its fast, frantic action.

Tetris 99 gets a 3 on the toaster scale. Slam in your bread and get treated to a nice slice of toast. Its a bit on the pale side mind, so could have done with a bit more time to ensure those crusts could get all nice and crispy.

Follow me on Twitter @gameswithtoasty, or join the Games With Toasty Facebook page here for exclusive updates on the future of the blog, as well as notifications for when the latest articles drop. Happy gaming.

Legends fortold in the scrolls tell of a man. A man destined to wow the masses with his wit, charm and eye-melting good looks. Ladies and gentlemen, I am not that man. If I was to describe myself, I would use the phrase - 'Optimistically awful'. View all posts by Toasty